Just the two bolts holding the fulcrum pin to the spring tower to come off here. 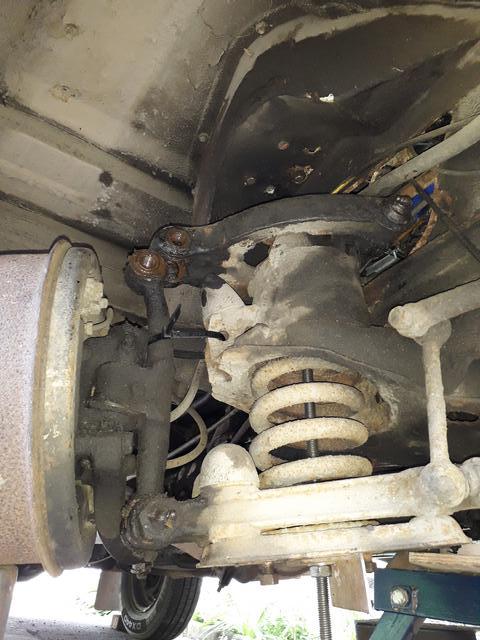 On the bench. Note the stack of shims that were between the fulcrum pin and the tower. 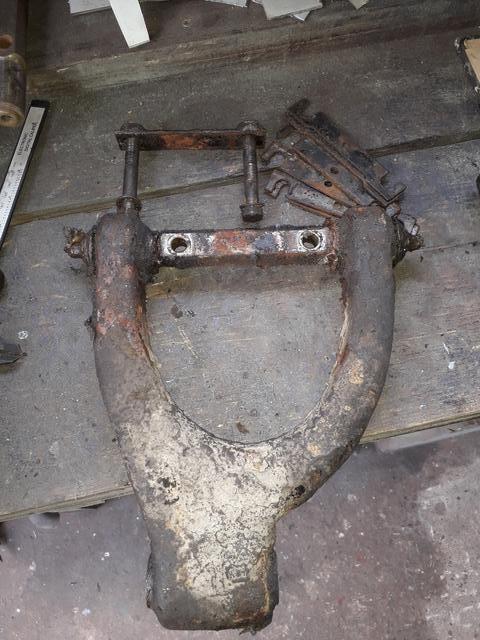 Finally got to use my bottle jack press in anger 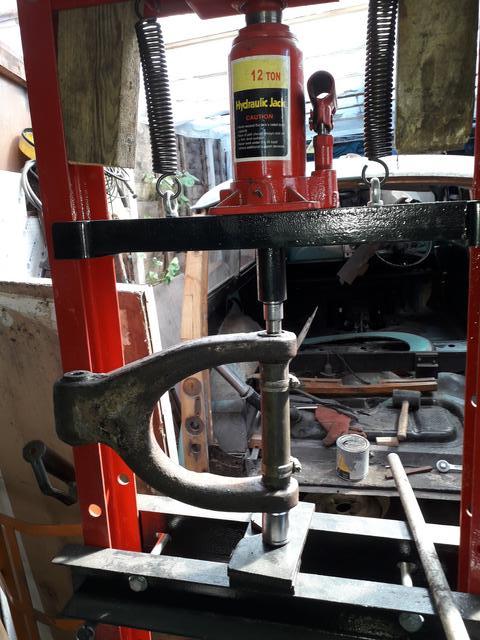 Note the length of split 1" pipe to prevent the arm from collapsing when the bushes are pressed out, they cant be done individually as the are threaded internally.
I've got it all disassembled and tomorrow I'll be pressing the new bushes and pin into the arm.

Always wondered how they came apart.

Staff member
And so to continue..............
I managed to salvage a couple of the old seals as I didn't have any new, they were used on the inside of the bushes and I found some 'O' rings for the outer ends

Not bad for near 50 year old rubber

New bushes and pin pressed in

The split tube is slightly longer than the gap it fits into (.030"), this gives a pre-load on the threaded bushes when it's removed and the arm springs back into shape..
All back in, I even painted it

Will get mine boxed up for you to do

Very good work, but did you do the correct side?

I know your not that daft, Are you?

paulfordy said:
Finishing paint isnt so nice really is it, i resprayed a VW polo last week, putting the paint on is the easy bit isnt it,wet flatting and buffing is such a bloody chore though![V]
Nice to know the Mini's coming along nicely!
Click to expand...

Did my apprenticeship on TK.

Staff member
I think I've had my money's worth out of Harvey's exhaust. Many patches and repairs since I fitted it a long time ago. 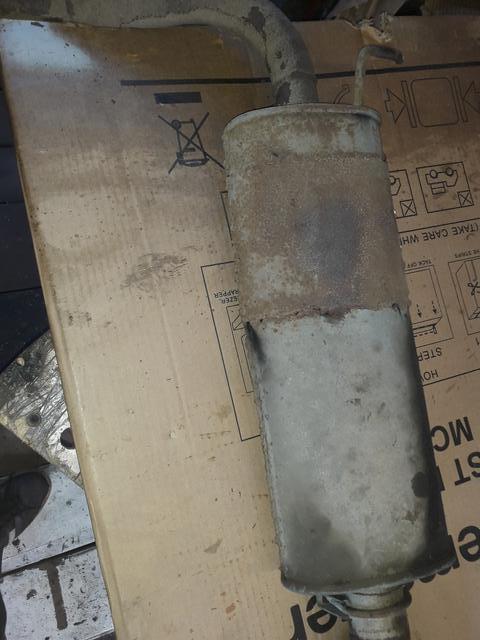 A box full of Jetex silencers, bends and strait bits 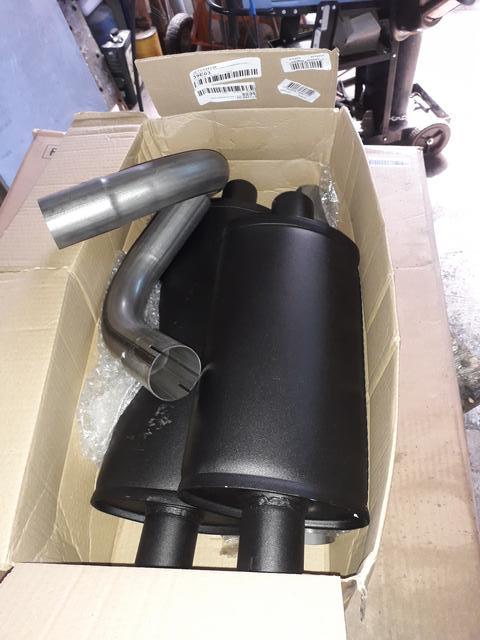 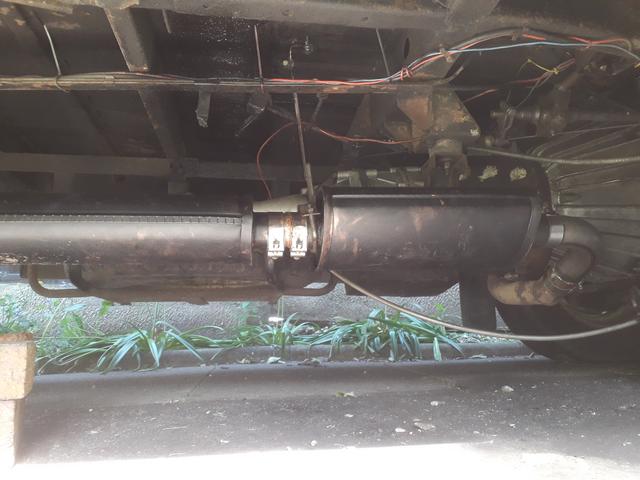 I had to twist the first silencer to clear the gearbox cross member. I used two silencer to keep the noise down, both are strait through so minimal back pressure. 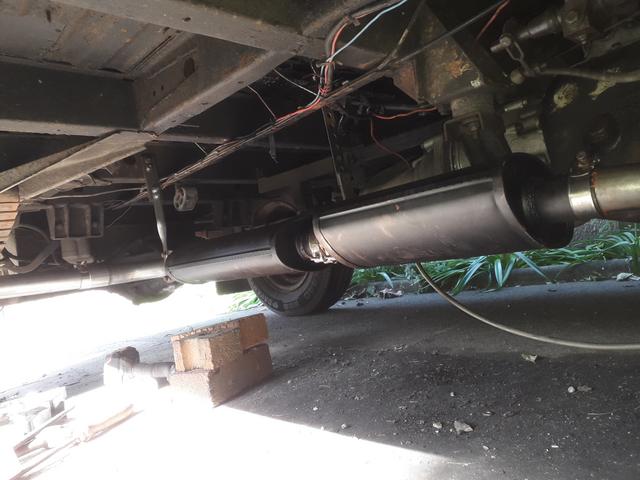 The tail pipe is a little bit too short and I think another support bracket is needed, sort that out tomorrow.
Harvey goes brum brum very nicely now

Very nice, my first exhaust was a little too short and down hill throttle off you got all the gases back into the van, took me a year to realise it wasn’t from under the engine cover - stuck an empty tin can on the end while in France and problem solved

Staff member
I've got a length of chrome pipe off an industrial vacuum cleaner, he he he he he
T

Very tidy Bedford TK, brings back a lot of memories from when I was a kid, my dad used to drive one on the farm, they are
very few of the Tk's left in the UK as like the commers they were very prone to rot..

this very similar to my set up. I had the problem that the engine shaking on rough idle kept causing stress fractures with the way I had it mounted. Version 2 triangulated the mounting points - you can just see one of them above the silencer - and the addition of a flexible joint (I probably didn’t need one this long).

Staff member
Just replaced the front wheel bearings on Harvey, just the off side, and also the wheel cylinder. I used a little tip I found on the Mini Forum to hold the cylinder in place while fitting the circlip to the back (which is always a bit of a struggle). The pic shows a Mini rear brake but it's the same method used for the Commer front

So simple it's brilliant

Staff member
Last Thursday, after months of lockdown, we decided to for a little run and take harvey for a picnic. All the tasty goodies packed and ready we stopped off to get some petrol then went to start the van................nothing............complete loss of all electrics..........nothing Managed to push him away from the petrol pumps and started checking stuff, fuses fine, nothing obvious hanging off, bugger. After half an hour of poking and prodding I admitted defeat and called the breakdown man who arrived soon after. The poor chap looked bewildered but dutifully started poking around with his probes, we established that the battery was OK and there was power to the solenoid but that was about it. I had a piece of fairly heavy wire in the cupboard and touched one end to the battery and the other to the fuse box and everything burst back into life so with the wire secured enough to stop it dropping off, and much to the breakdown mans relief, we made it the two miles back home without bursting into flames.
So for the last two days I've been pulling my hair out in frustration unable to trace the fault, like I said there was power to the solenoid but that's it. Swapped the solenoid for a new one - no difference, swapped the alternator- no difference, remade some dodgy connections on the back of the alternator - no difference. Had the dash out to check the ignition switch, had the ignition relay to bits and found it working perfectly.
I'd been looking at the wiring diagram until my eyes had gone bleary when I noticed something a little different, according to the diagram the wires from back of the alternator should be brown - well what's that big thick red one doing disappearing into the loom then Actually it was in a separate loom from the main one, looked factory though, so traced it back to where it emerged behind the dash and found it went to the ammeter hmmmmm. Stuck my hand up and poked at the wires and everything sprung into life, poked a bit more and it went off again. So knackered ammeter was the cause of the problem I joined the wires together and insulated the join to within an inch of it's life and now all is back to normal
Except for the accelerator jamming on because the cable had frayed But that's tomorrows job.