Staff member
It's a very nice face too, sporty and classy

I eventually got round to working on the bonnet. As expected, the minor bubbling concealed filler and rust with new metal welded over rust along the leading edge. There were also some hefty dents with 1/4 inch of filler. I made a former to make repair panels as the bonnet is gently curved in two directions. Having made the first panel I cut a section of the bonnet and exposed the rusty frame. I suspect that this is very much like the repair on a Commer door bottom. Having repaired the frame, the new top panel was carefully welded to avoid warping. I worked my way across the whole bonnet and removed as much of the dent as possible using heat shrinking. A skim of filler and a coat of primer and I am quite pleased with the result. A trial fit and and it looks good. I've also managed to secure the missing headlights from someone in Egypt, so tried them for size.

Panky said:
I beginning to look like a great car
Brilliant work on the bonnet
Click to expand...

Good work, do love these, they had a Gordini one in Anglia car auctions last year, bit rough but very repairable

jimberlake said:
Good work, do love these, they had a Gordini one in Anglia car auctions last year, bit rough but very repairable
Click to expand...

Mine is a Gordini in all but name. It is a 1972 TS which was re-badged Gordini in 1974 together with a slight increase in capacity from 1565cc to 1647cc. It was quite advanced for its day, having an all alloy hemispherical engine, fuel injection, disc brakes all round, 5 speed gearbox and electric windows. It's an enlarged version of the engine used in the Lotus Europa. I did see that Gordini in the auction which was known to the Renault Classic Car Club. Anyone repairing one of these has to factor in making all your own panels as there are no new ones available and good secondhand panels are rarer than Commer quarterlight seals!

Ahhh, learnt something there, great looking cars and very different. Really like the old Renaults and Citroen’s

I thought it was about time to give a bit of an update on this long running saga. I have moved lock-ups again as My landlord saw me struggling with the space I had and commented that I would benefit from a larger garage if one became available. Soon afterwards he contacted me to say one was coming available if I wanted it. It is about 3 feet longer and a couple of feet wider, not much, but sufficient to make a difference. He has since made some new doors and I have moved in.
The car is progressing and I am on the laborious task of preparing it for paint and have identified that the original paint finish was cellulose, so I have taken the decision to repaint it myself. This avoids the need to transport the car elsewhere and I can do it in stages, painting panels at home and the body at the workshop.
In the meantime, I have beet sorting out parts for the interior. The rear has a large fitted mat which I thought was beyond use, but a jetwash transformed it. I have no carpets for the front, but do have a set from a later model in gold, which were in a filthy state. A bit of shampoo and a jetwash later they were transformed, but still the wrong colour, so I bought some American Rit dye on Ebay which is suitable for synthetics. I ignored the instructions and applied the dye with a spray bottle and a sponge. It did a good job of penetrating the pile, but did not affect the vinyl edging or the mat, so I bought some Auto Glym black dye (not cheap), which not only coloured the plastic, but gave the carpet a deeper black finish. I then used it for the carpet at the bottom of the door trims which had faded. I am sure that this could be useful on Commers!
Here are some piccies:

Staff member
Nice job, they look great and those seats look rather scrummy
This is the gun I got after playing around with very cheap ones with mixed results. 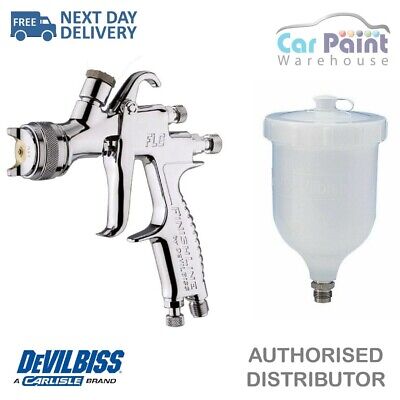 As far as quality guns go it's at the low end of the price range but I've had great results with it and can thoroughly recommend it. Go for the 1.3 nozzle version, it's about right I've found and try and avoid the Chinese copies, genuine ones are made in UK. I got mine off Amazon for a few pounds less (and I had some birthday vouchers to spend)

I also fitted one of these to the gun, so the pressure can be set at the gun rather than the compressor. I set to 2bar 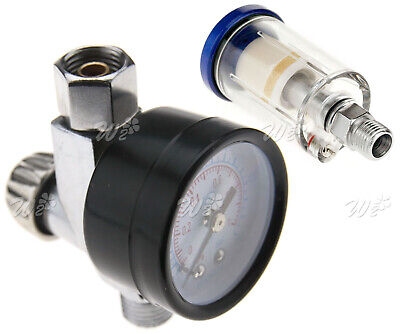 Thank you for that advice. I went to my local motor factors to discuss paint and see if they could get the correct colour as helpfully, Renault have re-introduced the paint code used for mine for a new colour. When I mentioned this the lad behind the counter instantly knew what I was talking about and found the right code for the paint used between 1972 and 1979, but it was labelled blue roy rather than blue fonce. My research has already found that in the USA blue fonce was renamed blue royal which explains this anomoly. He also said he thought he had a can of spray paint in the correct shade and, sure enough he did. I asked him how long he had that in stock as it was rare even in its day but apparently the same colour code was also used on Alfa Romeos. Anyhoo, I bought the can for a colour match to the surviving traces of blue paint. It is a perfect match.

Staff member
Sounds like you've got a great place there, rare these days.

This was never going to be a nut and bolt restoration, but hey ho!

Staff member
I'm afraid I'm guilty of that too

The repaint has started on front wings, bonnet, scuttle and tailgate. Beginning to get the hang of it, but more work required on bonnet and scuttle, then I just have the rest of the car to do!

I'm going to have to change the colour back to blue on the logbook now. Fair bit of flatting and polishing required next, then, when I've done the doors I am back to the stage I was at when I bought it: "painted and ready to be be reassembled"!

I'm able to give it a little more time these days. Interestingly, I removed the fuel sender to look inside the petrol tank and discovered it is about half full. It was last on the road in 1988, so it is probably leaded 5 star. The petrol has no smell whatsoever, but I would be interested to know its volatility.